skip to main | skip to sidebar

Here I am at last! It took me several months to reach this point. I have designed the figures, Paul Hicks has sculpted them, Stewart Griffin of Griffin Moulds has casted them and Tom Weiss has painted them. I admit that I am very pleased with the result. Tom has painted them as the defenders of Malta during the great siege of 1565.
The first three codes of the range are ready. I will start to sell them in the near future.
RC1. Command figures. 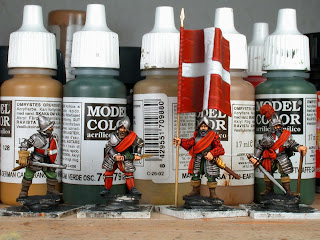 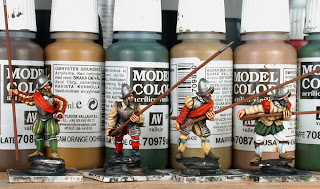 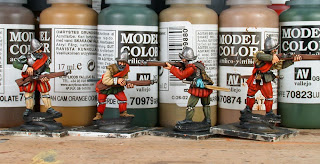 Paul is now working on cavalry.
My friend Ioannis Mavromichalis has asked me some photos of the unpainted miniatures. I will shoot some. I know I must do that. As usual, the only problem is time!
Pubblicato da Arsenal Miniatures a 06:58

The Revenge of Christendom

Until the XVI century, Christendom had suffered greatly under the sword of Islam and for several reasons had been almost unable to react to its menace. Then, fortunately, this inactivity came to an end.
In 1521, Suleiman the Magnificent, ruler of the Ottoman Empire at the height of its power, prepared to dispatch an invasion fleet to the island of Rhodes. It was to prove the opening shot in an epic struggle between rival empires and faiths for control of the Mediterranean that consumed the centre of the world for sixty years.
It is the story of the great contest between the Ottomans and the Spanish Hapsburgs, a fast-paced tale of spiralling intensity that ranged from Istanbul to the Gates of Gibraltar and features a cast of extraordinary characters: Hayrettin Barbarossa, the original Barbary pirate, the risk-taking Emperor Charles V, the Knights of St John, last survivors of the military crusading orders, and the brilliant Christian admiral, Don Juan of Austria. Its brutal climax came between 1565 and 1571, six years that witnessed a fight to the finish, decided in a series of bloody set pieces: the epic siege of Malta, the battle for Cyprus, with the desperate defence of Famagusta by Marcantonio Bragadin, and the apocalyptic last-ditch defence of southern Europe at Lepanto.

I have always been very interested in this period, but I decided to design this range after reading two books. The first is “Empires of the Sea: The Final Battle for the Mediterranean, 1521 - 1580” by Roger Crowley. The second is “The Great Siege: Knights vs. Turks MDLXV. Anatomy of a Hospitaller Victory” by Stephen C. Spiteri, a must for anyone seriously interested in the subject.
Please, contact me at arsenalminiatures@yahoo.it or at andrea.magnani@tin.it

Arsenal Miniatures
My name is Andrea Magnani. I am 43, male, Italian (sorry for that!), married with two daughters. I work as a "Dottore Commercialista", which is something between a fiscal lawyer and a chartered accountant. There is not a British or American equivalent, I think. History and wargaming are my favorite hobbies. The idea to start this project came one evening, after I had a day to leave behind. I decided that I had better enjoy myself and avoid to worry if the business would not reach the break-even point. With the sale of the miniatures I will (perhaps!) reduce my losses.